On 26-07-2015 in  Khammam District a grand rally was organised with the help of RSS,BAJRANGDAL, VISHWA HINDU PARISHAD, HINDU VAHINI AND other institutions to Ban cow slaughter.  I attended the meeting as chief guest for the meeting in which a rally and protest was organized outside the COLLECTORATE and DIG OFFICE to stop the illegal cow slaughtering which is going on with the help of veterinary department and police department and other officials by taking huge bribe from the butchers community and also given a representation to the COLLECTOR AND DIG POLICE against the illegal cow slaughtering,  I came to know that there are more than 6 centres in Khammam where the cows has been sold to the butchers and then after purchasing from that centre with the help of POLICE DEPARTMENT AND VETERINARY DEPTARTMENT AND OTHER OFFICIALS the cows were transfer to the illegal slaughtering houses. During the meeting many questions were raised by the area people and they stated that no one is taking care about the illegal cow slaughtering Even on complaint no FIR is being booked against the culprits and I advised the area people to get united and work for the Hindu Sanatan Dharma  and also to protect our Hindu ladies and girls before they  became the victim of love jihad . 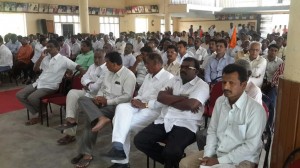 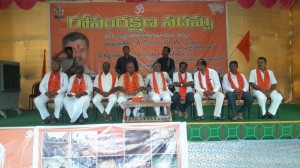 On 18-09-2015 Had Ganesh Darshan at Various Mandaps in Malkajgiri, Tirmulgiri, Alwal , Vinayaknagar along with VHP, Bajrang Dal and BJP Leaders and performed Pooja,