Author r@mr@m Posted on Posted on February 14, 2015
0
Visited Osmania General Hospital after he came to know about protest by the Sanitation staff. Due to the protest of the sanitation staff the patients at the hospital were facing severe sanitation and cleaning problem, After my intervention the problem was solved and the salary which was stopped for last 3 months in which 1 month salary was released, The sanitation staff started the work giving relief of hundreds of patients in the hospital.
In Osmania Hospital Cleaning staff sanitation staff consists of 225 workers and are not receiving salary for last 3 months,”Gauri Mahila Mandal Group” of JiyaGuda has taken the contract of sanitation in Osmania hospital, previously in 2013 the sanitary department was run by “All service contract group”

The sanitation staff has been protesting since last 8 days for salary, and since 2008 to 2010 PF was stopped by Gauri Mahila Mandal by the proprietor Sandhya,

On earlier occasion when salary was stopped by the contractor Gauri Mahila Mandal Group, then the management of Osmania hospital represented by Superintendent Dr. Raghuram they have cleared the salaries from Arogya Shri funds, but the employees did not receive funds. The sanitation staff who come from poor background find hard meet their expenses as they are not getting salaries on time During the visit the I came to know that contractor is doing malpractices by showing higher number of sanitation staff and taking money from the Government for it, In the other hospitals the salary of Sanitation staff has been increased by in the Osmania Hospital the sanitation staff is still being paid lesser salary. 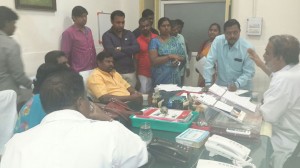 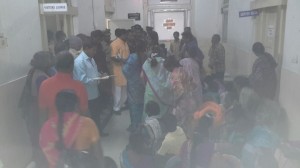 Yesterday Padayatra in Sultan Bazar Division, Interacted with people to know their Issues