Visited Osmania University and submitted letter to Vice-Chancellor Smt. Rajeev R. Acharya, IAS raising my objection for allowing BEEF FESTIVAL in the University Campus, Along with me members of HIndu Janajagruti Samithi Members were also present.
Here is the contents of the Letter:

According to media news it is noted that some left wing student organizations of Osmania University has planned “BEEF FESTIVAL” on 10th December ,2015 at Osmania University college campus and they invited some controversial outside political leaders, writers to the Beef festival. Education institutions are temples where lakhs of students would study, create their future in education in such peaceful environment of college irrespective of Cast and Community.

Organizing Beef Festival in a University College Campus is against to tradition of college which harm the majority Hindu community students, teachers faiths and disturb the teaching environment.

In the year 2012 also the same Beef festival turned into violence and clashes. The students were attacked with stones and sticks, many students injured, hospitalized and even the college property was severely damaged. The violence led to burning of many RTC buses and ultimately law and order situation was disturbed in college campus.

I Strongly condemning the organizing of Beef Festival in Educational institutions. 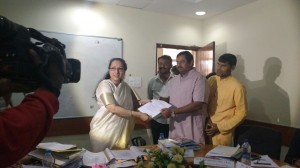 Raised the issue of Cow Slaughter in Telangana Assembly